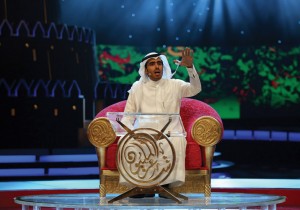 Million’s Poet, the Arab world’s most popular TV program, is the United Arab Emirates’ answer to American Idol. A panel of three judges scores contestants in the performance of original nabati poetry (an oral form indigenous to the Arabian Peninsula) in a competition for $1.3 million. In keeping with the nabati tradition, the themes of the poems are often political, most famously in the show’s fourth season when veiled poet Hissa Halal recited a piece against fatwas (legal rulings issued by Islamic scholars, often with severe punishment).